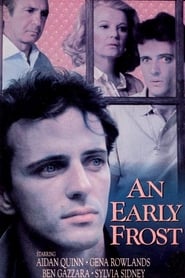 Set in the mid-eighties Michael Pierson, a young gay man, is struck with AIDS in the prime of his life. He's forced to be open about the disease and his homosexuality for the first time with his co-workers (he's a successful lawyer) and family. He, and the people around him, must face up to the inevitablity of his death and the disease that's killing him. "An Early Frost" was many people's first look at an AIDS victim as a human being instead of a statistic.