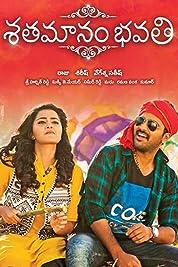 The anguish that negligent children can cause is depicted here from the parents' perspective. Raghavaraju (Prakash Raj) is a farming landlord in Atreyapuram village of Andhra Pradesh. He lives with his wife Janakamma (Jayasudha), along with his son Bangararaju (Naresh) his wife, and his son Raju (Sharwanand). Raghavaraju lives in this ancestral house built by his forefathers consisting of many generations living in the same household as a Joint family. However with changing times Ragahvarju's NRI sons and NRI daughter live in the United States, Canada, and Australia as nuclear families. After a gap of 10 years, all his children arrive in the village during the holiday season of Makar Sankranti, under mysterious circumstances after they receive an email from Raghavaraju who expresses his wish to divorce his wife Janakamma. What happens next and the events leading to this mysterious situation, and how Raghavaraju conveys his midlife crisis to his children forms the crux of the story.